The most interesting part of language learning is experiencing another culture. For, Language does not exist apart from culture, that is, the socially inherited assemblage of practices and beliefs that determines the texture of our life. The study of Japanese language offers unique insights into Japan’s fascinating national culture, which boasts a rich heritage in the fields of native craftsmanship, performance art, visual art, music, film and graphic design. Anyone who can see and feel the beauty of the Japanese Language and culture can improve her/his cultural understanding and international awareness. It also helps one to gain an enhanced perspective of one’s own language and culture.

Through this Blog we would like to offer and share our knowledge and exchange our views & ideas with you all on Japanese language and culture. Let’s expand our possibilities both professionally and personally by learning Japanese.

If you have any query regarding translation or interpretation from Japanese to English or vice versa,
please feel free to contact us.....
letter2anindya@gmail.com or pratyajayaditya@gmail.com

Professor Kazuo Azuma, the eminent Indologist and Japanese Tagore scholar passed away on 28th July, this year, at his birth place Ichikawea town near Tokyo in Japan. He was 80. The death of this legendary Professor ends an era in the field of Japan-Bengal cultural relation. 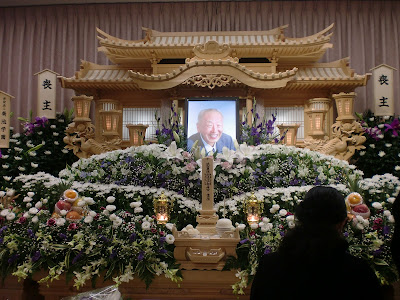 Professor Azuma was born on 14 August in 1931. He obtained his Masters in Japanese language and literature from Tokyo University and in Indian Philosophy in 1959. Besides, he learned German Language and Literature. Later, he received D.Lit. (Honoris Causa) on Tagore Studies, from the Rabindra-Bharati University, Calcutta, in 1986. 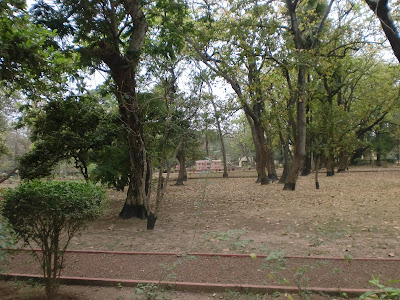 Prof. Azuma came to Shantiniketan 1967 and served at Visva Bharati as a Reader and Head of the Department of Japanese language and literature from 1967 to 1971. He shaped the Japanese department there. Though he returned to Japan in 1971, his admiration for Tagore impelled him to keep constant touch with the people of Bengal. Shantiniketan was his second home.

Azuma spent most of his life studying Tagore and spreading awareness about the Nobel laureate's works in Japan. His fascination with Rabindranath started in his early life when he read Rabindranath’s Gitanjali, Dakghor, Raktakarabi in Japanese translated from English and got attracted to his writings. Later on, he started reading the English translations of Rabindranath too. 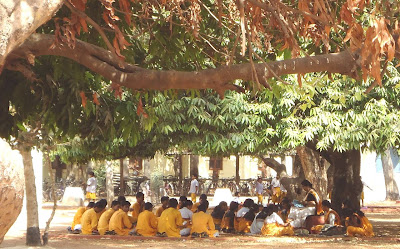 A class is going on under the tree in Shantiniketan

Driven by this admiration, maverick Azuma decided to leave behind a promising career and came to Visva-Bharati as a teacher of Japanese Language and Literature and spent more than two and a half year. This had cost him his permanent job at Yokohoma National University as a teacher of German Language, when he went back Japan in 1971. Both Azuma and wife then began working at NHK-Japan Radio on part time basis. But he stayed immersed in the fathomless waters of Rabindranath and was dedicated to spread Tagore culture in Japan. In his opinion, Tagore was not only for Bengalees, but for the entire world. Japanese reverence for Tagore is like Goutam Buddha. These two noble persons enriched the cultural and spiritual fields of Japan.

Professor Azuma’s biggest contribution lies in bringing out Japanese translated version of Tagore’s works. He was the man behind the translation of Tagore’s complete works directly from Bengali into Japanese which he started in 1973 with a team of Japanese scholars. The work in 12 volumes was published over 20 years by Daisanbummei Publications. Prof. Azuma led this very complicated and serious work with much skill. 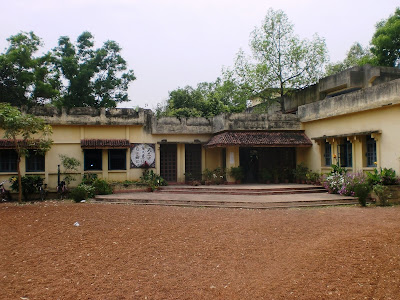 Professor Azuma took a great initiative in establishing Nippon Bhavan in Shantiniketan, the centre for Japanese studies. Tagore had a dream to set up a Nippon Bhaban, devoted to the studies of Japanese, like the China Bhaban at Santiniketan. He had requested Tsusho Byodo (1903-93) of Tokyo Imperial University who was studying Indology at the Visva-Bharati then, to take initiative for it. But World War II started soon after and plans went haywire. Professor Azuma contacted Professor Byodo after returning to Japan in 1971 and the ‘Association for Establishing Nippon Bhaban’ was established in July, 1989. Professor Biyedo became the President, while Kazuo Azuma (1931-2011) became the General Secretary. Two years later Tsusho Byodo laid the founding stone in Shantiniketan. After the hard work of five years, finally Tagore’s dream came true when it was formally inaugurated on 3 February in 1994 by the then Vise President of India, Dr. K. R. Narayanan. The Ambassador of Japan to India and many noted teachers and personalities were also present. Nippan Bhaban came to light because of Kazuo Azuma’s patience and perseverance. To establish the Nippon Bhaban, he had to go through a lot of hurdles. 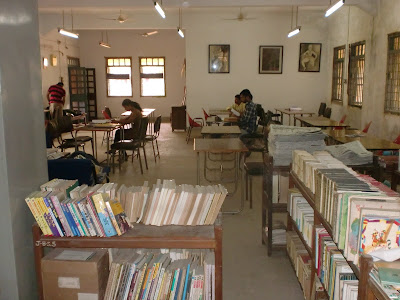 Professor Azuma has also played an important role in the foundation of Bharat-Japan Cultural Centre, at Rabindra Okakura Bhavan, an Indo-Japanese cultural centre at Salt Lake in Kolkata. He contributed unreservingly. 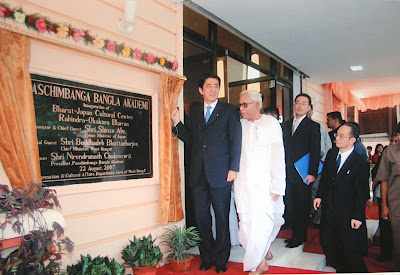 Prof. Azuma played an important role in creating a condition for the proper appreciation of Rabindranath in Japan. He had authored more than fifty essays on Rabindranath. His book Rabindranath and His Thoughts is a great resource on the poet in Japanese. A greater promoter of friendship between India and Japan, Prof. Azuma translated some diaries and memoirs of Japanese scholars who had some association with Tagore and Shantiniketan. His Shitoko Harir Dinopanji is a translation of the diary of Shitoku Hari, the first Japanese student of Visva-Bharati. This and Kampo Arai er Dinopanji, the diary of the eminent painter who met Abanindranath Tagore and exchanged opinions and artistic views and also came to Shantiniketan and taught painting there during 1917-18; remind us about the rich history of cultural and artistic exchange among a remarkable group of intellectuals and artists of Japan and Bengal. His Ujjol Surjo and Prosongo Rabindranath o Japan are the rich stores of anecdotes and information. Japana O Rabindranatha, satabarshera Binimaya also gained much appreciation. 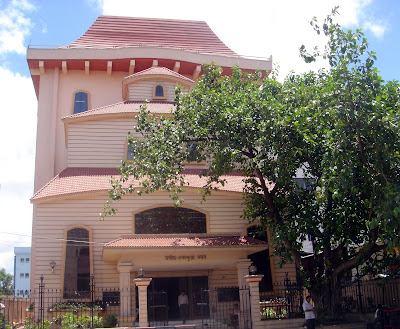 Rabindra-Okakura Bhavan
Prof. Azuma was conferred many degrees, titles and honours in his life. He was the recipient of the highest honour of Visva-Bharati - 'Deshikottam' and received the Rabindra Puraskar from the government of West Bengal. He was also conferred D. Lit by Rabindrabharati University in 1986, ‘Rabindrachyarya’ by Tagore Research Institute, Kolkata in 1989, Academic achievement Award by Eastern Institute and Indian Embassy, Tokyo in 1993, and Second time D. Lit by Lalbahadur Shastri National Sanskrit Vidyapith in 1994. 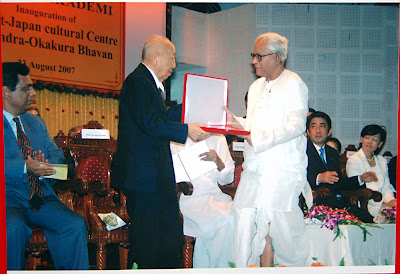 Prof Azuma has been an icon in respect of Bangla language and Rabindranath. This simple man had dedicated all his life and energy only for the cause of understanding and admiring Bengalee culture & literature. And lion's share of that life’s journey was occupied by Tagore. 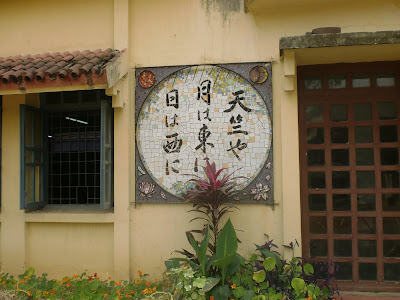 We would like to express our heartfelt love and reverence to this lifelong devotee of Tagore and his literature.
Posted by Anindya at 12:59 PM

Email ThisBlogThis!Share to TwitterShare to FacebookShare to Pinterest
Labels: Art and Culture, Articles, Information and interaction

Dear Anindya,
Can you please let me know who holds the copyright for the photograph you have used, titled,

Can you please let me know who holds the copyright for the photograph you have used, titled,

hi,
Thank you for publishing this valuable information...!

Dear Friends,
Thank you very much to inform the Indians' about the devotion of Deshikottam Kazuo Azuma and this is for your information a documentary film on Pof. Azuma was made by me entitled IN QUEST OF PEACE in the year 2000, on his Cultural Activities between India and Japan

Thank you very much for the beautiful page about Late Prof. Azuma.

The most interesting part of language learning is experiencing another culture. For, Language does not exist apart from culture, that is, the socially inherited assemblage of practices and beliefs that determines the texture of our life.Japanese Language Courses In Delhi NCR

Many people will get lot of benefits by reading this kind of informational stuff .Thank you so much for this .
All Idioms

Areas we can cover: 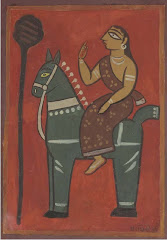 Tempera on paper by Jamini Roy